In Memory of Michael Henderson 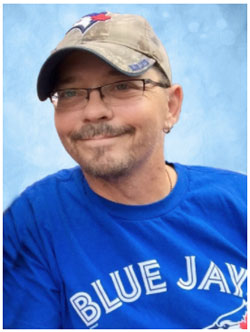 On Monday, October 18th, 2021, at 53 years of age, surrounded by his loving family, Michael passed away. After many years of health complications, he is finally at peace.

Michael was the long-time love and husband to Heidi (nee Weigel) for 28 years. Beloved Dad and Superman to his two loving daughters Kelly (Brock) and Jessica.

Michael was the cherished middle brother of Tracy and Bart Pfeifer and beloved brother-in-law and uncle to many. Michael was predeceased by his parents Jim and Cecilia Henderson and his In-laws Margarete and Wolfgang Weigel. As well as many beloved grandparents, aunts, and uncles.

Michael was born in Fergus Ontario but grew up in Kitchener-Waterloo. He was very proud of his Scottish roots and like any good Scot would love to tell you all about his long family tree, his Grandfather’s years in the Fergus Highland Band and his family coat of arms, which states, Sola Virtus Nobilitat meaning, alone we stand virtuous and noble.

He attended St Jeromes Catholic High school and later KCI where he met his future wife, Heidi. After many years of dating, they married and had two beautiful daughters, Kelly and Jessica. They were the light of his life. Michael was also an avid animal lover and he adored his dogs Benny and Gus, as well as his grand pups Winston (Little Bear) and Koda.

Michael was a cherished friend to many and loved spending his time with them golfing, fishing, and playing ice/ball hockey. Michael looked forward to spending time every summer at the cottage on Silver Lake, where he could sit at the campfire surrounded by friends and family.

Michael started his career welding industrial door frames and worked his way up into Architectural sales at CN Weber of Kitchener, from there he moved on to sell industrial architectural hardware for the Sargent division of Assa Abloy out of Toronto. Michael had incredible people skills and would spend the next 15 years there making many life-long friends in the industry.

The Henderson’s would like to thank the many nurses in the GRH Emergency Department and ICU, who have taken such excellent care of Michael over the years. They would especially like to thank Melissa, Chad, Rebecca and Diane in GRH ICU for taking such good care of Michael, showing empathy, compassion and kindness. Also for being so kind and caring to the family. We will never forget the compassion we were shown.

Condolences for the family and donations to the Canadian Diabetes Association and the Grand River Hospital Emergency Department may be arranged by contacting the funeral home at www.erbgood.com.