In Memory of George Drimas 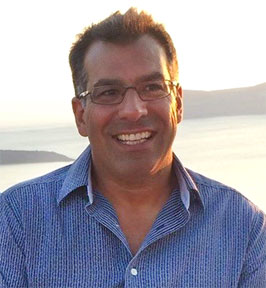 It is with profound sadness that we share the passing of George Drimas. George left us suddenly at his home in Vancouver on Sunday September 12, 2021, at 57 years old. He was born in Montreal on December 25, 1963 and moved to Vancouver in 1989.

He will be dearly missed by his wife Janice Stevens, son Alexandros and daughter Olivia, mother and father Mina and John Drimaropoulos, brother Deno (Connie Iacono) and niece Christina.

George’s exposure to the door hardware industry began in his mid-teens when he worked summers in the warehouse at Canaropa’s head office in Montreal. He continued to work on and off at the company while he went to school and played football in Montreal, ending up with the Concordia University Stingers. He moved to Vancouver in 1989 and spent a year exploring a career outside of the door hardware industry while continuing his education and improving his IT skills by taking professional courses. It became apparent to George that his place was in the door hardware and security business, so in 1990 he rejoined Canaropa as a full-time Sales Representative for Western Canada, working out of the Calgary office. He worked for several years, acquiring extensive knowledge of the industry. In late 1999, George took on a leadership role at Canaropa across Canada. In 2003, he was the driving force in opening Canaropa’s sales office and warehouse in Vancouver, where he had settled and raised his family.

In 2011 George became President of the Jo-Van Distribution company in Toronto. Under his leadership, the company expanded to a group of security distributors, including J.W. Benton Ltd. in Vancouver, CC Craig in Winnipeg, Calgary and Edmonton, and D.G. MacLachlan Ltd. in Vancouver. George was always very mindful and had tremendous respect for the many suppliers and customer relationships he had built throughout his career.

George will be dearly missed by his family, friends, and colleagues throughout the industry.